With a fond farewell, AHG honors the vital teamwork of Gloria Anders. Over the past four years, Gloria held titles of Office Intern, Office Assistant, and Office and Events Manager, dealing with demanding daily responsibilities with grace and skill and thriving amongst other dedicated herbalists. (The photo below shows Gloria on the left  enjoying a special herbal field day with her co-workers Mimi and Heather) 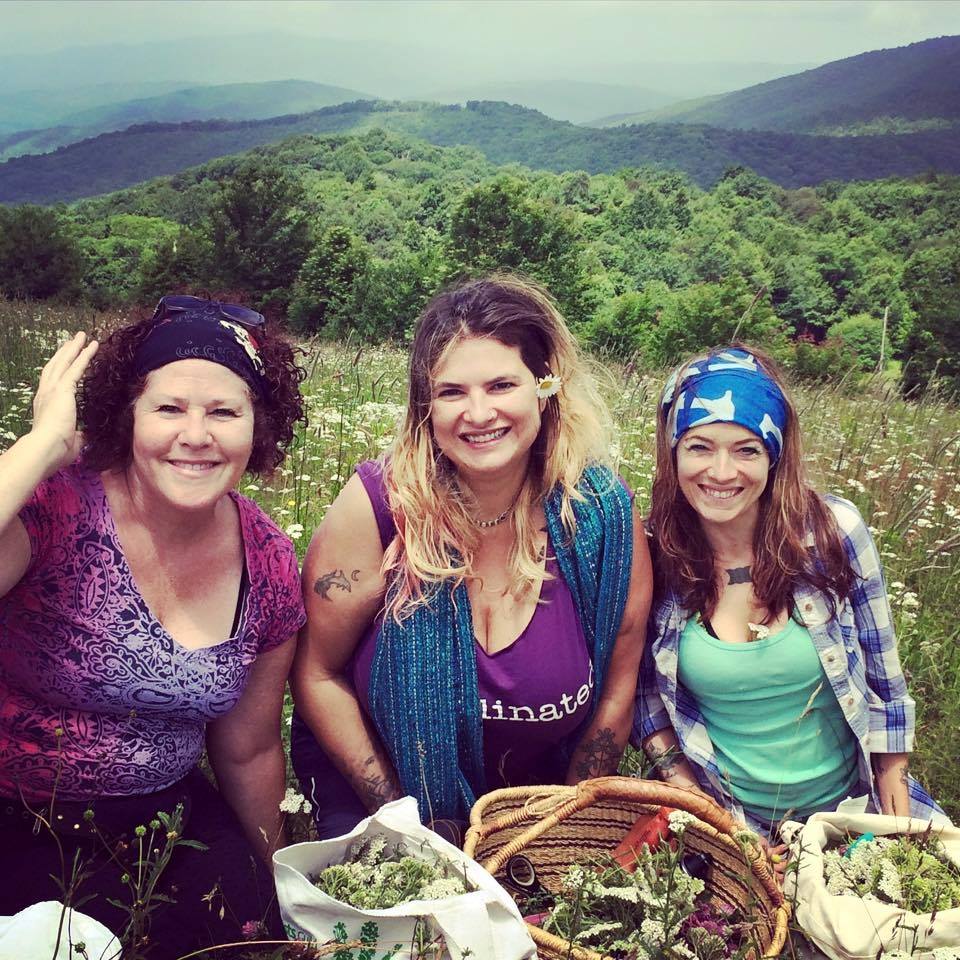 Gloria, an Asheville native, says her love for herbalism began in childhood, eating roots and plants and learning, “…What to pick and how to cook it.” Her grandmother, who grew up near Max Patch, taught Gloria essential medicinal and foraging skills which instilled in her a deep sense of respect for herbal arts and Appalachia.
After two career changes and her mother's battle with Alzheimer's, Gloria decided to pursue herbalism, her true passion. She attended the Appalachian School of Holistic Herbalism and studied clinical herbalism under Corey-Pine Shane. Gloria came into the fold as an intern at AHG in 2013 under the guidance of Director, Mimi Hernandez, and was an instant fit. Gloria has since moved gracefully with AHG through major changes and growth.

"Everyone loves her," says Mimi, "…And we love that Appalachian voice." Gloria’s is a voice that hails from Jackson County, NC, an endearing lilt that helped connect AHG to its mountain roots through her strong ties to the Appalachians.
Mimi Hernandez reflects on Gloria’s importance: "Gloria became not only Office Manager, but also Events Manager. She takes care of everything office-related, keeps us all coordinated with tasks, and most importantly, Gloria is the first point of contact for many of our members."
Gloria describes the joy in connecting with so many leaders in the national community of herbalists. "It's all of the textbook authors and all of the rockstars in these herbal schools. I'm getting to talk to the people, the people who wrote the books."
Gloria looks back on her years with AHG with gratitude, knowing she accomplished what she set out to do: find occupation involving herbalism in her hometown. "I love herbalism and what it can do for people," says Gloria, while at lunch on Lexington Avenue. "The AHG is a wonderful organization that really resonated with me. This is what I want to do."

"It’s important to me to have an office atmosphere that’s comfortable, productive, and positive. Gloria creates this energy to the core," says Mimi. "And she has great Feng Shui." Gloria's first career of 18 years was in interior design, a skill she applied to her position at AHG.
Although Gloria's position at AHG is sure to be filled by another capable supporter, Gloria’s energy is an irreplaceable force. Her dedication to taking care of all the AHG staff and member needs is deeply appreciated and will be missed.

With her experience in organizing herbalists, Gloria now looks forward to turning her property into an herbal oasis, including transforming her kitchen into an alchemical space and carefully formulating medicine bottles and labels with love and healing. "I leave with a heavy heart," says Gloria, as she transitions into working as a clinical herbalist. "I’m excited to finally get to be a practitioner on my family property. But I will miss AHG. The organization and its founders are all amazing."

Many Thanks to local Asheville writer Kim Anderberg